Introduction: Robot-assisted surgery is a rapidly advancing and evolving field. There has been substantial progress in not only the ability but the availability of robotics in passing years allowing the field to expand. Robotics is unique in that it is not centered on a primary surgeon, but rather a multidisciplinary team approach with contributions by the surgeon, the scrub technician, the bedside assistant, and other integral people. As a result of this change, the new and complex surgical approach should be subject to critical review. Specifically, this paper looks at the most common robotic procedures in our hospital and reviews the perioperative complications, specifically surgical site infections. This study is part of an ongoing review of prospectively collected data comparing the rate of surgical site infections (SSI) in laparoscopic versus robotic operative cases, using NSQIP and Midas databases.

Methods: NSQIP and MIDAS reviews of all patients who underwent laparoscopic and robotic surgery from 2013-2015 at Saint Mary’s Hospital were collected and examined for SSIs. From this data, the most common procedures performed in both arms were selected for review: cholecystectomy, sleeve gastrectomy, colectomy, and hysterectomy. The only exclusion criterion was those patients who had more than one procedure performed during the same case.

Conclusion: The above data suggests an increased incidence of SSI in the robotic hysterectomy cases. This could be related to the learning curve by the surgeons or operative staff included in the robotic procedures as most SSIs occurred during 2013 relative to 2014 and 2015. Looking at the number of procedures performed by each surgeon and the corresponding case minutes it appears the more cases a surgeon does, the shorter the duration of the case and the less likely a resulting SSI. While this can be true of laparoscopic cases as well, there is more staff in the room and an extended length of time involved in setting up and performing robotic procedures; all of these factors increase the risk of SSI. 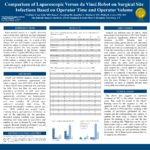