CASE REPORT: A 45 years old patient presented with lower abdominal pain and diarrhoea with mucoid discharge for a period of 2 months. Clinical and perabdominal examination revealed no abnormality except for moderate degree of pallor. USG of abdomen and pelvis showed colocolic intussusception. CT scan of the abdomen and pelvis showed the bowel within bowel configuration of the ascending colon suggestive of colocolic intussusception. Barium enema showed obstructive pathology with defect in the ascending colon. Colonoscopy revealed a mass lesion in the ascending colon, occluding the lumen and hence the scope could not be negotiated beyond the mass lesion. The patient underwent a diagnostic laparoscopy, the colocolic intussusception was identified. Laparoscopically, by a 4- port approach, right hemicolectomy was done. Ileo-transverse anastomosis was done by bringing the bowel loops out by a small incision. The anastomosis was carried out by a linear cutter and stapler. The cut open specimen showed a pedunculated polypoidal lesion at the leading edge of the intussusception. Histopathology showed a polypoidal lesion suggestive of an inflammatory fibroid polyp. There was no evidence of malignancy. The postoperative period was uneventful. The patient is doing well after a period of one year. 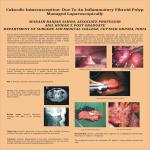