CCX following endoscopic papillotomy for choledocholithiasis in the elderly: Is it necessary?

Introduction: Long term outcome of endoscopic papillotomy was found to be relatively favorable, so cholecystectomy is not always necessary.That might be of clinical importance in selected groups, such as high operative risk patients and elderly.The aim of this study is to present the natural history of elderly patients after endoscopic papillotomy and to define the need for subsequent cholecystectomy.

Methods: A retrospective analysis of all patients above 60 years old, who underwent ERCP for biliary stones disease in our institution, between 2012-2014, was performed. Patients with cleared bile ducts were followed for subsequent cholecystectomy or non-operative management, as well as for biliary complications.

Results: 111 patients were analyzed. The average age was 79.4 +/- 9.1. A vast majority of patients (88.2%) had an ASA score of 2-3. Three patients died in their initial hospitalization, and another 8 did not have long enough follow up to be included. Of 100 patients which were followed for at least 6 months, 46 underwent a cholecystectomy in a median time of 2 months. The cholecystectomy group had a significantly lower ASA score (P=0.04) compared to non-operated group. Long term biliary complications occurred in 5 patients (10.9%) in the cholecystectomy group and in 4 patients (7.4%) in the non-operated group (Pic 1). These were all managed successfully, conservatively or endoscopically, except one patient in the non-operated group who died of recurrent cholangitis. A significantly higher percentage of patients below the age of 80 were operated (77.1%), compared to patients above 80 (17.3%). A higher number of long-term complications was observed in the above 80 group (9 versus 2).

Conclusion: Considering the relatively low long term biliary complication rate in elderly patients with biliary ducts cleared by ERCP, follow-up without a subsequent cholecystectomy is a reasonable option. That approach should be tailored for specific patients, taking into consideration operative risk, age and patient preference. 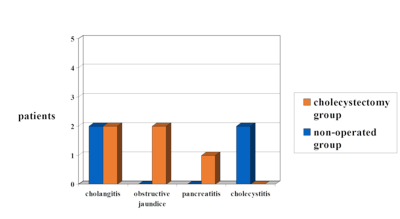