Case Report: Use of a Stent to Treat a Colonic Anastomotic Leak

Anastomotic leaks are a serious complication in colorectal surgery that often require operative intervention and fecal diversion. Use of uncovered self-expanding metal stents in the colon has gained wide acceptance, especially in the treatment of malignant obstruction. However, there is limited data on the use of stents for benign colorectal disease. The successful management of benign leaks, perforations, and fistulae of the upper GI tract has been described using covered self-expandable metal and plastic stents. These covered stents are a potentially useful tool for the treatment of benign colorectal conditions. We describe the results of endoscopic stenting of an ileorectal anastomotic leak with a covered self-expandable stent.

A 68-year-old male with history of left colon resection in November 2011 for intractable diverticular bleeding presented with a colorectal anastomotic leak. He subsequently underwent a subtotal colectomy with an ileostomy. Following elective ileostomy reversal and hernia repair in July 2012, the patient developed a leak of the ileorectal anastomosis. Conservative treatment with CT-guided drainage, bowel rest, hyperalimentation and intravenous antibiotics was started but it proved unsuccessful. The patient was taken to the operating room for an exploratory laparotomy and abdominal washout. The anastomotic leak was identified and approximated with interrupted sutures. Fibrin glue was the applied. Flexible sigmoidoscopy was then performed intraoperatively by the GI service. The colonic anastomosis was identified at 20cm. A JagwireTM straight tip high performance guidewire was placed endoscopically and the stent was introduced over the wire. A WallFlexTM Esophageal 23mm x 125mm expandable fully covered stent was deployed endoscopically over the anastomosis. The distal edge of the stent was 8 cm from the anal verge. The proximal end of the stent was anchored with endoclips. The abdomen was closed and reinforced with a Strattice mesh. There were no operative complications. After 14 days, flexible sigmoidoscopy was performed and the stent was removed with anastomosis intact upon examination. The patient was discharged home on a regular diet two days later.

Anastomotic leakage following colorectal surgery is a serious complication and a major source of morbidity and mortality with a reported incidence of 6% to 22%. There is limited data on the use of covered stents for colorectal leaks with only two case series reports to our knowledge. Abbas described a case report of two patients in 2009 treated with a self-expandable covered nonmetal stent for a colorectal and an ileorectal anstomotic leak resulting in no operative intervention. One patient was found to have migration of the stent twice and underwent two subsequent procedures to replace the stent. DiMaio et al.  reported a case series of 5 patients treated for postoperative colorectal anastomotic leak with covered self-expandable metal stents successfully in 4 out of 5 patients, with one patient requiring surgical diversion. In conclusion, we believe that some colorectal anastomotic complications may be amenable to endoscopic management sparing the need for a diverting stoma or other surgical interventions. 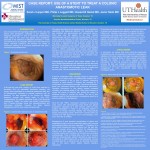