Case Report: 60 year-old female with no significant past medical history presents with a 10-year history of nocturnal cough that had worsened over the past 3 months and had associated regurgitation. She underwent esophagogastroduodenoscopy (EGD) that showed a tortuous esophagus and tight lower esophageal sphincter that required dilation.  She received an upper gastrointestinal (UGI) contrast study that showed a dilated, tortuous esophagus with ‘bird’s beak’ tapering, consistent with achalasia, as well as a large epiphrenic diverticulum measuring 7x7cm. 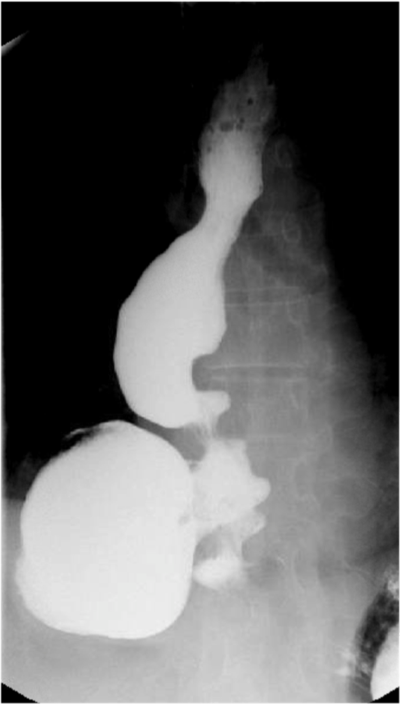 Esophageal manometry confirmed “pan-esophageal pressurization” consistent with Type II achalasia. Given her symptoms in the presence of these findings, she elected to proceed with surgery. She underwent laparoscopic, trans-hiatal epiphrenic diverticulectomy, Heller myotomy and Dorr fundoplication. Extensive dissection allowed for approximately 8cm of retraction down from the chest and we were able to come across it with a single blue load of a 60mm linear cutting stapler. 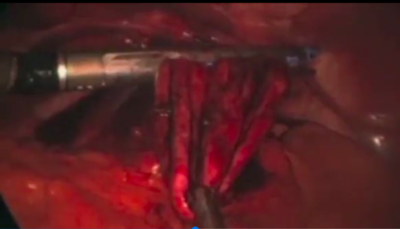 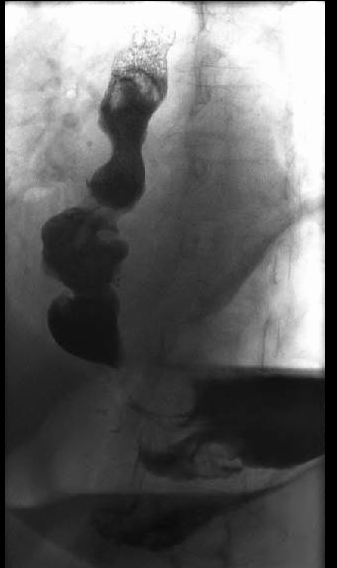 She was seen at 2-week and 1-year follow-up appointments with complete resolution of symptoms.

Discussion: Epiphrenic diverticula in the presence of achalasia has an occurrence rate of 25%. Large diverticula (>5cm), are even more rare with only a handful of case reports in the literature. Historically, thoracotomy or, more recently, thoracoscopic approaches are required for resection. However, thoracic approaches are associated with a 20% increase in morbidity, namely due to staple line leak and the resulting pulmonary complications. Only a single case report exists on our review of the literature that demonstrates successful trans-hiatal laparoscopic resection without post-operative complications of a diverticulum of this size. The shortest documented length of hospital stay post-operatively for similar cases is 4 days, while the average is 7-10 days or longer for those with complications. Our patient was able to go home on post-operative day 1 after a normal UGI and was tolerating a soft diet. Not only does this case show that a large epiphrenic diverticulm can be successfully resected via the trans-abdominal laparoscopic approach, this case makes the argument that patients undergoing any minimally-invasive epiphrenic diverticulectomy and myotomy, with or without fundoplication, may be successfully managed with early post-operative contrast studies and dietary advancement, thus decreasing their length of hospitalization and overall cost of treatment.