Background: Bariatric surgery remains a prevalent option for the surgical management of obesity and its comorbidities. A redundant length of roux limb also known as the "candy cane" limb may produce vague symptoms that are difficult to diagnose and manage.

Clinical Case: A 54 year old man with a BMI of 35.3 with comorbidities including diabetes, hypertension, obstructive sleep apnea, and degenerative disc disease underwent a laparoscopic roux en y gastric bypass in antecolic antegastric fashion with a linear stapled and handsewn gastrojejunostomy anastamosis. The small bowel mesentery was closed with 3-0 silk. He presented a year later having lost 100 lbs with acute abdominal pain. There was concern for an internal hernia. He was explored laparoscopically, and the distal small bowel was reduced from Peterson’s defect. The bowel was dilated proximal to the jejunojejunostomy and the Peterson’s defect was closed. He presented a month and a half later with persistent nausea and vomiting after meals. An upper gi series with multiple oblique views revealed a dilated redundant "candy cane" roux limb which was not apparent on prior imaging. On exploration, there was preferential entry of the orogastric tube into the "candy cane" limb. A 3×5 cm blind limb was resected by loosely abutting a 34 Fr OGT with a linear cutting stapler. The patient had complete relief immediately postoperative and at six month follow up.

Conclusion: A redundant "candy cane" roux limb may cause persistent nausea, vomiting, and early satiety. Limiting the length and orienting the roux limb to aid in gravity drainage at the initial operation may prevent this syndrome. Careful review of imaging with an experienced radiologist in real time with additional obliquely angled views may help diagnose this rare complication. 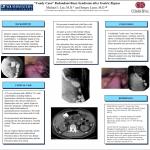