Results
Included in the study time frame were 105 patients with a 35% incidence of hyperlipidemia on cholesterol lowering medications. 80% were female and 20% were male. Ages ranged from 19-65. Patients lost on average 70lbs. Lap band accounted for 8% of all procedures, lap sleeve gastrectomies accounted for 30% and the remaining 62% were roux-en-y gastric bypass.
Over the 12 month period all lipid indices measured decreased. However, the change in LDL and cholesterol was not statistically significant. The change in HDL and triglycerides were statistically significant at 12 months. In addition, when comparing degree of weightloss to change in HDL(P<.05 and a R= -0.28) and triglyceride(P< 0.5 and R=0.31), there was a statistically significant correlation. This suggests that the greater the weightloss the more significant the rise in HDL and the greater the weightloss the greater the drop in triglycerides.
An additional phenomena was seen in the data, at two weeks a deleterious change was seen in all lipid indices prior to improvement.

Conclusion
Bariatric surgery shows a significant decrease in triglyceride and increase in HDL, both of which are correlated to the degree of weightloss. This is especially important for patients with metabolic syndrome. 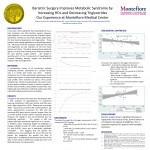