Introduction: Bariatric surgery, and the extreme weight loss associated with the procedure, can lead to unique clinical conditions. Eustachian tube dysfunction, or patulous Eustachian tube, is a rare but described clinical phenomenon in the setting of massive weight loss.

Case: We present a case of a 35 year old female with a preoperative BMI of 37.9 who underwent a laparoscopic sleeve gastrectomy. Six months postoperatively, after losing approximately 60 pounds (EWL 70%), she developed a sensation of fullness, muffled hearing, and autophony (the unusually loud hearing of one’s own voice) in the left ear. Her symptoms persisted over the next several months, during which time her total weight loss reached 83 pounds (EWL 92%). She was eventually referred to otolaryngology for evaluation. Audiogram and tympanostomy results were normal. Fiberoptic endoscopy revealed a wide orifice of the left Eustachian tube with a persistent gap, consistent with a patulous defect. She is currently on a trial of conservative management, including nasal hydration and hypertonic saline drops.

Results: A literature search identified 2 publications which describe Eustachian tube dysfunction after weight loss surgery. The mechanism is thought to be due to loss of adipose tissue, or “Ostmann’s fat”, in the peritubal region. This allows the Eustachain tube to remain patent. The resulting clinical symptoms include autophony, hearing one’s own breathing, and a sensation of aural fullness in the setting of normal audiometry and tympanostomy findings.

Conclusions: The rapid weight loss associated with bariatric surgery predisposes these patients to developing Eustachian tube dysfunction. While not previously described in the bariatric literature, there is data to suggest that this syndrome is a highly prevalent, though largely under recognized, entity in this specific population. Raising awareness of this condition among the community of bariatric surgeons will facilitate diagnosis and allow appropriate referral and management. 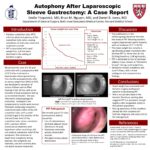