Introduction: Laparoscopic skills training has evolved over recent years. However, traditional mentoring (TM) still engages verbal and visual cues which may distract or confuse the learner. To facilitate laparoscopic skill transference, an Augmented Reality Telementoring (ART) Platform was designed to overlay the instruments of a mentor in real-time onto the trainee’s laparoscopic monitor. The aim of this study is to compare the effectiveness of this new teaching modality in novices to traditional methods in performing an intra-corporeal suturing task.

Conclusion: The Augmented Reality Telementoring (ART) Platform may be a more effective training technique in teaching laparoscopic skills to novices compared to traditional methods in our simulated study using a validated suturing drill. ART conferred a shorter learning curve, which was more pronounced in the first 4 trials. ART resulted in faster suturing times and reduced number of failed attempts by the end of the training session. Augmented Reality Telementoring may be a time-effective training tool in shortening the pathway to proficiency for laparoscopic novices. Further studies to assess the applicability of ART to remote locations and intra-operative mentoring are underway. 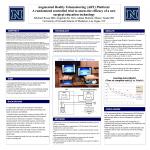