Institute for Medical Science and Technology, University of Dundee

Introduction
Minimal Access Surgery (MAS) is based on advanced visual and manipulative technologies and increasingly includes in complex interventions in anatomically difficult regions, preoperative planning and intraoperative navigation/ guidance for complex surgical interventions. Preoperatively, 3D reconstructions of segmented images of the pathology are obtained from (CT/MRI) scans. The operating surgeon wears a special see-through helmet which enables both direct images of the patient’s anatomy and when needed, the virtual image of the pathology. This ‘augmented reality’ has been shown to provide excellent intraoperative guidance, facilitating the execution and minimizing damage to important structures including major vessels during surgery.

Methods
Progress in head-mounted see-through displays has not kept pace with other forms on image display technology largely because of first generation helmets which aside from being heavy produced poor image quality (brightness, resolution and contrast), limited field of view (FOV). Since the large increase in the use of devices for video entertainment, several companies have invested considerable research in the development of light-weight wearable head mounted displays (HMD).
The present study was designed to investigate the performances of two of the latest HMDs chosen on the basis of their performance in terms of transparency (see through), FOV, resolution, high contrast, weight, and 3D viewing. The two systems studied were the Epson BT100 and the ST1080 by the Silicon Micro Display. The experimental design consisted of a randomised allocation of the order of use of the two systems to two groups of participants: surgical trainees (n = 10) and qualified attending surgeons (n = 6), all of whom viewed a series of printed text, static laparoscopic images and 10 -15min video clips of laparoscopic procedures. The order of the two HMDs by each participant was based on random allocation by a computer program|. The assessment by each surgeon was based on a Visual Linear Analogue Scale (VLAS) directly entered by participants on a computer without any interaction with the researchers running the study.

Acknowledgment: The study is funded by a grant from the Royal Society of Edinburgh (RSE, Grant No. 443570/NNS/INT) and the National Natural Science Foundation of China (NSFC, Grant No. 61211130122) as part of a bilateral agreement to promote and facilitate the international collaboration between research based in Scotland and in China. 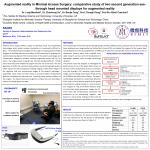