Introduction: We aim to carry out a feasibility study testing the use of haptic feedback in robotic surgical systems in discerning anatomical structures of different firmness. Surgeons frequently rely on tactile feedback during laparotomy for localization of critical vascular or neural structures imbedded within soft tissue. We hypothesize that this capability can be simulated with haptic feedback on a surgical robot.

Results: Mean task completion time and standard errors for trials under the three different feedback conditions were 112.35 +/- 18.62, 97.51 +/- 15.27 and 63.00 +/- 12.11 seconds, respectively. The decrease in task completion time did not reach statistical significance with use of pneumatic normal force feedback alone (p=0.762), but bi-modal haptic feedback use was associated with significantly decreased task completion time (p=0.003). Out of the 19 subjects, 6, 12, and 17 subjects were able to accurately localize the imbedded tubular structure without haptic feedback, with pneumatic normal force feedback alone, and with bi-modal feedback, respectively. Similarly, the increase in discriminatory power was statistically significant only when bi-modal haptic feedback was provided (p=0.0009), but not with pneumatic normal force feedback alone (p=0.058).

Conclusion: Preliminary results from our phantom experiment indicated that haptic feedback in robotic surgery can be helpful with both shortening task time and increasing accuracy in discerning structures hidden in soft tissue. Future studies with larger sample size will help characterize this novel application of haptic feedback in surgical robots. 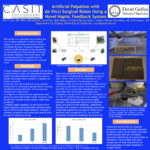