Application of Hem-o-lok Clip in Basic Laparoscopic Procedures: A Single Center Experience on 856 Cases and Review of Data From Food and Drug Administration

Introduction: There are several methods for ligation of structures during laparoscopic operations. Several studies have studied the efficacy, safety and cost of the various devices in different situations. Each technique has its own potential drawbacks. Applications of endoloop require dexterity and training. Endoscopic staplers are expensive instruments. Titanium clips may be slipped from its primary position.
Hem-o-lok clip (Weck Closure Systems, Research Triangle Park, NC) (Figure) is a nonabsorbable polymer clip with lock-engagement feature as well as teeth within the jaws, all of which may provide greater security. This clip has gained popularity among urologists primarily for ligation of vessels of renal hilum during nephrectomy with appropriate results. We, as well as many others, have also adopted the hem-o-lok for a variety of laparoscopic procedures in recent years. However there are a few reports about the results of its use in laparoscopic general surgical procedures. 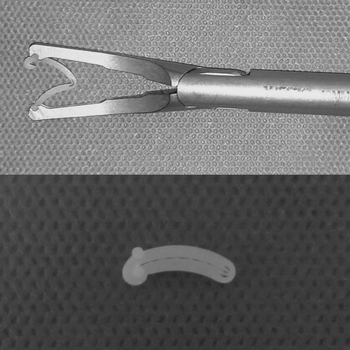 Methods: The hem-o-lok was routinely used in our operating room in a tertiary hospital since 4 years back. We retrospectively reviewed all laparoscopic appendectomies (LA), cholecystectomies (LC) and splenectomies (LS) performed by 6 surgeons during this period.
In LA for closure of base of appendix, one hem-o-lok clip is applied on the patient side and one clip on the specimen side. Sometimes the ligation of mesoappendix is also performed by hem-o-lok. During LC, one or two hem-o-lok clips are placed on the proximal part of cystic duct and one is placed on the distal part. In most cases, ligation of cystic artery is also performed with application of one hem-o-lok clip. During LS, after circumferential dissection of splenic artery and vein, two hem-o-lok clips are placed on the patient side of each vessel and one is placed on the splenic side.
Clip failure was defined as intraoperative or postoperative bleeding because of clip failure which may necessitate placement of another clip, conversion to open procedure or postoperative re-exploration. Leakage from cystic duct and appendiceal stump after LC and LA also defined as clip failure.
Search of the U.S. Food and Drug Administration Manufacturer and User Facility Device Experience (MAUDE) database was performed on the 15 July 2009. This online resource contains reports of adverse events involving medical devices. We performed multiple searches using the following keywords, alone or in combination: Weck, hem-o-lok, clip, appendectomy, cholecystectomy, splenectomy and laparoscopy.
Results: During four years period, 856 laparoscopic operations including 770 LC, 55 LS and 31 LA were performed. We did not have incident of clip failure.
Within the MAUDA database, we identified 79 reports of adverse events related to hem-o-lok clip including malfunction in 65 cases and clip failure in 17 cases. Eighty-two percent (n=14) of clip failure was reported during nephrectomy. The reported clip failure after LC (with bile leakage) was 2 and after LS (with bleeding) was only 1. There was no report of failure after LA.
Conclusion: Properly applied hem-o-lok clips during basic laparoscopic procedures may provide a safe option. Surgeons must be educated regarding its proper technique of application. 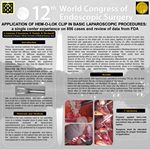