[Backgrounds] A percentage of Japanese obese patients whose BMI is over 30 is approximately 3%, which is still quite low compared with western countries. Therefore, a bariatric surgery had been uncommon surgical option for the treatment of morbidly obese patients in Japan until recently. Only a few private hospitals and University hospitals have been performing the bariatric surgery in Japan. Total number of cases of bariatric surgery in Japan is still around 600. However, due to recent change of dietary habit, a population of obese patients has been increasing rapidly as well as in western countries. Moreover, in Japanese obese patients, type 2 diabetes (T2DM) tends to become severe with a relatively low BMI. We recently introduced a bariatric surgery for morbid obese patients. Since a rate of gastric cancer is thought to be high, we started from sleeve gastrectomy instead of roux-en Y gastric bypass which is most common procedure in the United States. Then we introduced sleeve gastrectomy with duodeno-jejunal bypass. Here, we present early results of our cases.

[Patients and Methods] Since October 2010, we have performed 13 bariatric surgery laparoscpically. Indication of surgery is patients’ BMI>35-kg/m2, or BMI>32-kg/m2 with severe T2DM, which is considered as a metabolic surgery. Eight patients underwent Laparoscopic Sleeve Gastrectomy (LSG), and 5 patients underwent Laparoscopic Sleeve gastrectomy with Duodeno-jejunal bypass (LSG/DJB). Meal Tolerance Test (MTT) was performed at preop, 3 month, 6month, and 12 month postoperatively. Of those patients, we assessed perioperative outcomes, short term weight loss effect and anti-diabetic effect. [Results] Mean age of patients is 43-y.o. BMI is 45kg/m2 in average (LSG: 49, LSG/DJB: 38). Nine of 13 cases are in medical treatment for T2DM (LSG: 4/8, LSG/DJB: 5/5). Mean preop HbA1C level (NGSP) is 6.2% in LSG, 8.1% in LSG/DJB. Preop HOMA-IR is 4.7 in LSG, and 4.6 in LSG/DJB. Operative time was 142min in LSG, and 270min in LSG/DJB. Estimated blood loss was 13g in LSG and 75g in LSG/DJB, respectively. No postoperative complication or mortality was observed. EBWL% after 6 month was 39.2% in LSG, and 51.5% in LSG/DJB. HOMA-IR 6 month after surgery decreased to 2.0 in both groups. Only one patient in LSG/DJB requires postoperative medical treatment for T2DM, who previously received over 70IU of Insulin injection with preop serum C-peptide level of 1.2ng/ml, while other patients does not take any anti-diabetic medicine after surgery. MTT shows dramatic improvement of blood glucose curve and IRI curve. 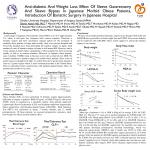