An Unusual Case of Intussusception Masquerading As Rectal Prolapse.

Case: A 30-year old previously well, nulliparous woman presented to Emergency complaining of a mass intermittently protruding from her anus. After confirming her story with a self-taken cellular phone picture of the mass, a provisional diagnosis of rectal prolapse was made. She also described a one-month history of intermittent rectal bleeding, left lower quadrant abdominal pain, and tenesmus. Her past medical history was non-contributory while physical exam was unremarkable aside from mild left lower quadrant tenderness.

She had been hospitalised and investigated within the past month by colonoscopy and CT for similar symptoms. The colonoscopy identified what appeared to be either a submucosal or an extrinsic mass compressing the lumen of the sigmoid colon. The CT scan of the abdomen revealed a 6cm x 4cm x 4.5cm fat-density mass in the lumen of mid sigmoid colon that was consistent with a submucosal lipoma. The patient discharged herself from hospital shortly thereafter.

Given the atypical clinical setting of rectal prolapse in a young, nulliparous woman and the findings on CT scan, repeat colonoscopy was recommended. During colonoscopy, a large intraluminal mass was visualized in the distal rectum. With continuous insufflation of air, the mass moved proximally and reduced its position dramatically to the level of the mid sigmoid colon. A diagnosis of colo-colonic intussusception was made with the lipoma serving as the lead point.

The patient underwent a laparoscopic resection of the sigmoid colon to excise the lipoma with negative margins, followed by primary anastomosis between healthy and viable tissue. Pathology confirmed the mass to be an angiolipoma. Three months following the procedure, the patient remains well with no further symptoms.

Discussion: Intussusception, the invagination of a proximal segment of bowel (intussuseptum) into the lumen of an adjacent segment (intussuscipiens) is most commonly described in the pediatric population. Only 5% of all cases of intussusception are described in the adult population, where it accounts for only 1-5% of all adult intestinal obstructions. In children, intussusception is most often primary and benign whereas in adults, nearly 90% of intussusception cases are due to a pathologic process that serves as a lead point including: carcinomas, Meckel’s diverticulum, polyps, strictures, or in this case, lipomas. 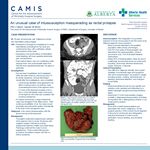