Data was gathered for a total of 253 patients over the course of 2 years from January 2011 to January 2013. These patients were selected from a private practice consisting of 3 surgeons conducting laparoscopic Roux-En-Y gastric bypass and gastric sleeve operations. Of these, 118 patients underwent port site closure using the traditional method with the closure device and 135 patients underwent port site closure with the Endostitch (As depicted in Figures 1 and 2). Postoperatively, all patients were placed on the same Dilaudid PCA (Patient Controlled Analgesia). Patients were consistently asked to rate their pain according to a standardized pain scale (1 to 10, 1 being the least painful, and 10 being most severe pain) . Incisional surgical site pain was documented separately. Pain was assessed every 4 hours and a numerical value was obtained. Postoperative pain over the course of the first 2 days was averaged. These averages were compared between the two groups. A two tailed t-test was used to determine statistical significance 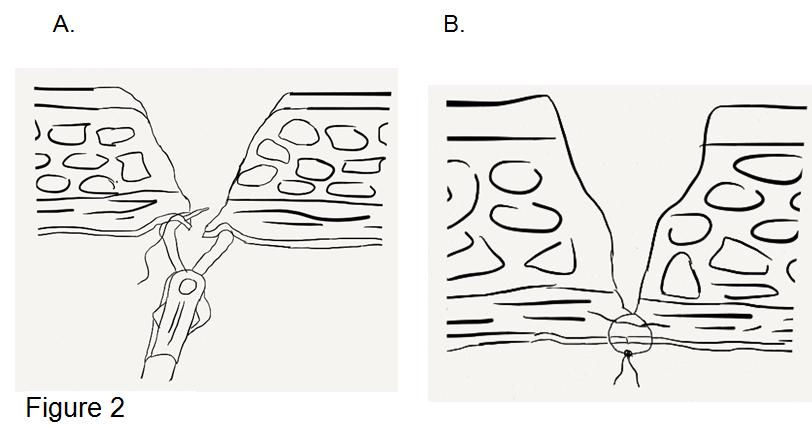 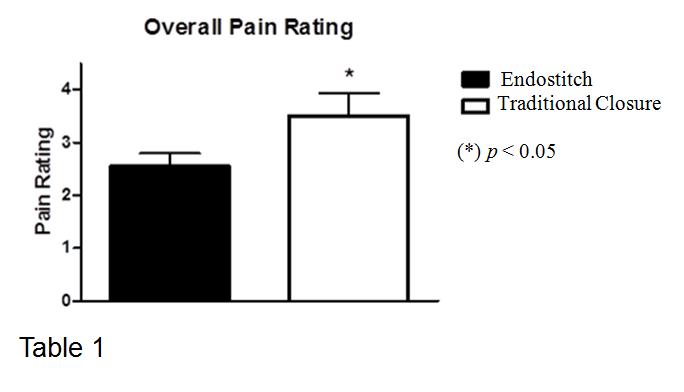 Closing laparoscopic port sites with the Endostitch is a significantly less painful procedure than using other port site closure devices. The Endostitch technique targets the fascial layer without taking full thickness bites. Other port site closure devices incorporate subcutaneous fat as well as muscle layers causing significant pain.
Increased pain hinders mobilization and deep breathing, which are essential in the immediate postoperative period. Incentive spirometry use is especially important in bariatric patients where obstructive sleep apnea is a prevalent comorbidity. Patients with less pain are also inclined to ambulate, which has been associated with increased lung volumes and reduction in deep vein thrombosis. Practical advantages include a reduced risk of inadvertently puncturing blood vessels causing port site hematomas as well as less risk injuring other organs with large needles used in port site closure devices. When the Endostitch device is already being utilized, port site closure accrues no additional cost. We therefore propose utilizing the Endostitch device in any laparoscopic surgery. We advocate that this significant reduction in pain is essential in overall recovery and smoother return to functional status. 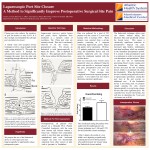