Ralph Ger described the first potential laparoscopic inguinal hernia repair in 1982. He describes a metallic clip applying device to close the hernia sac during laparotomy for other operations. He eventually describes one case of laparoscopic inguinal henria repair in a similar fashion with metallic lips only. His approach was applicabe to hernia sacs with defects less than 1.25 cm. He did not describe reconstructing the inguinal floor and his approach was not applicable for direct inguinal hernias.

The first total extraperitoneal approach (TEP) to inguinal hernia repair was first described by McKernon and Laws in 1993.  As with the transabdominal approach (TAPP), the principles touted by Rives and Stoppa for open preperitoneal repair of a large mesh providing coverage over all defects, distributing intra-abdominal pressure over the large mesh area, and requiring minimal fixation, were primary principles of the laparoscopic approach to inguinal hernia repair.

The indications for laparoscopic inguinal hernia repair, TAPP or TEP, are the same for open inguinal hernia repair.  They may be ideal for bilateral inguinal hernias and recurrences from anterior approaches, but is also appropriate with unilateral primary hernias when the surgeon is comfortable with the technique.  For young, active males with primary hernias, it may ofter decreased pain and an earlier return to activity.  Prior lower abdominal surgery or pelvic radiation are strong relative contraindications, as these may make access to the preperitoneal space difficult. 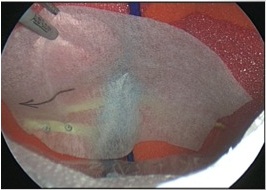 The patient is best positioned supine, with the arms tucked and pressure points padded. Laparoscopic monitors are positioned at the foot of the bed, and the surgeon opposite the side of the the hernia to be worked on.

An infraumbilical incision is used to access the peritoneal cavity and a 10-12 mm trocar placed.  An angled scope (30 degrees or more) is ideal and is used to place two 5 mm ports either in the midline below the umbilicus or in the midclavicular line bilaterally.  The hernia is visualized, and the peritoneum overlying it incised sharply 3-4 cm superiorly from the medial umbilical ligament to the anterior superior iliac spine.  Blunt dissection can be used to peal the peritoneal flaps inferiorly, exposing the inferior epigastric vessels, the pubic symphysis and the Cooper’s ligament, and the iliopubic tract.  A direct hernia should be reduced if seen, and an indirect dissected from the cord structures.  Femoral and obturator hernias can also be visualized and reduced.  Care is taken to avoid the “Triangle of Doom” containing the external iliac vessels bordered by the vas deferens medially and the gonadal vessels laterally. A mesh ranging from 10 to 15 cm in diameter of polypropylene or polyester is introduced though the subumbilical trocar and positioned anterior along the pelvic wall with the center over of the primary hernia defect.  The mesh can be placed directly over the cord structures, or “key-holed” to accomodate the cord, but may be associated with a higher recurrence with the latter technique. Fixation can range from absorbable to nonabsorbale tacking devices to the Cooper’s ligament along, to the Cooper’s ligament and the anterior abdominal wall, or with fibrin sealant, or no fixation at all.  The lateral abdominal wall is avoided to prevent entrapment of nerves within the iliopubic tract. The peritoneum is re-approximated with a running suture and ports removed under direct visualization.  The fascial defect at the umbilicus is closed under direct visualization.

The operative layout of the total extraperitoneal repair is identical to the TAPP approach.  The infraumbilical incision in the anterior fascia is made lateral to the linea alba, and the rectus muscle retracted laterally, exposing the posterior rectus sheath. A balloon dissector can be used, or the laparscopic camera, to open up the preperitoneal space under direct visualization. An angled scope can be used to place two 5 mm trocars under direct visualization in the infraumbilical midline, with the inferior port three fingerbreadths above the pubic symphysis. The landmarks and dissection are identical to the TAPP repair.  Any inadvertent tears in the peritoneum during dissection can produce a loss of working space.  A sutured repair of the defect, or a Veress needle in the upper abdomen to release intra-abdominal pneumoperitoneum, can maintain the preperitoneal working space.  If this is not successful, conversion to a TAPP repair would be appropriate.

The patient may be discharged on the same day of surgery.  Urinary retention may be a common complaint.  Diet can be resumed immediately and the convalescent period is at a 1-2 day minimum with full activity resumed at 2 weeks.