Hyperinsulinemic Hypoglycemia after Roux-en-Y gastric bypass may be due to the following mechanisms:

Hypoglycemia after weight loss surgery is often referred to as nesidioblastosis.  This may be a misnomer as it refers to normal beta cell growth during neonatal development and was synomymously used to describe familial hyperinsulinemic hypoglycemia in infants.  After falling out of favor as a term, it re-emerged to describe the entity of post-gastric bypass hypoglycemia with assumed or confirmed beta cell proliferation.

Up to 0.2% of patients after gastric bypass surgery may present with neuroglycopenic symptoms requiring hospitalization, compared to 0.04% of the general population. The risk is not increased after adjustable gastric banding or vertical banded gastroplasty (Marsk et al. Diabetologia. 2010). 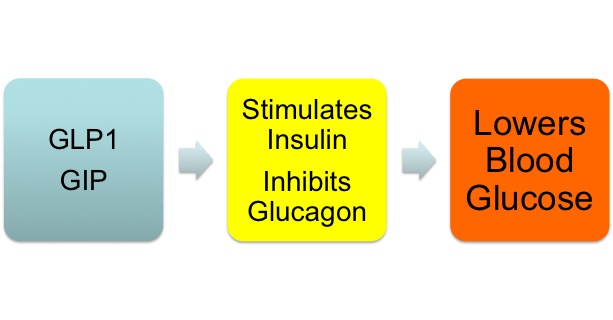 Patients presenting with hypoglyemia may have tremors, nervousness, weakness, nausea, altered mental status, cold sweats, or other symptoms.  When there is suspicion for hypoglycemia, serum fasting and post-prandial insulin, C-peptide, and glucose levels should be obtained.  Assays for sulfonylureas should also be obtained to rule out iatrogenic hypoglycemia, along with an elevated C-peptide level, especially in patients with previous or current diabetes mellitus.  Capillary blood glucose monitoring can be obtained to associate low blood glucose (< 40 mg/dL) with symptoms.  Imaging of the pancreas with computed tomography, MRI, or endoscopic transgastric ultrasound may be used to rule out pancreatic insulinomas.  Pancreatic histopathology can confirm changes consistent with islet cell neoplasia and beta cell hyperproliferation, with staining for insulin, glucagon, and somatostatin.  Where suspician is high, transhepatic measurements of insulin in the hepatic vein after injection of calcium intra-arterially in the superior mesenteric artery, gastroduodenal artery, and splenic artery can help localize the areas of the pancreas with increased insulin secretory activity.

Small, frequent (4-6 per day), low carbohydrate, and high protein meals may help to avoid symptoms.  Patients should carry snacks with them.

Pharmacologic treatment may include

In refractory patients, reversal of gastric bypass or subtotal or near total pancreatectomy can be considered.