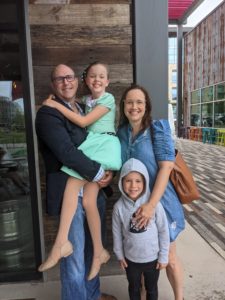 As a fellowship trained Trauma and Acute Care surgeon, Dr. Michael Cripps points out that his membership story is a bit different. “I have always believed in the benefits of minimally invasive surgery. As a new faculty member, I made a comment during an M&M case that I supported an MIS approach over an open approach for a case, which was a relatively unheard of sentiment for a trauma surgeon. In the audience that day was future SAGES President Dr. Danny Scott who found me after the conference and told me he had a perfect opportunity for me to join SAGES! It was with his encouragement, support, and leadership that the Acute Care Surgery(ACS) committee was formed to help promote the use of MIS in Acute Care Surgery.”

After involvement with a few SAGES committees, Dr. Cripps found his home as one of the inaugural members of the Acute Care Surgery Task Force, serving as Vice Chair at its inception. The variety of committee participation was great experience because, as a trauma surgeon, he says he often felt a little out of place but the combined experiences enabled him to meet many of the SAGES leaders.

What most endears Dr. Cripps to SAGES is that it’s a “visionary-based society constantly moving forward,” along with the “so many” SAGES members who’ve acted as mentors. For him, two stand out the most: Dr. Danny Scott and Dr. Rob Lim, adding that, “One of Danny’s more brilliant moves was to bring Rob Lim over to be the inaugural chair of the ACS Task Force and to pair us together to build it. Anyone who knows Rob knows that he is an amazing human. He and I became quick friends, and he deserves all the credit making the committee what it is today.”

He also credits Dr. Lim with his most memorable experiences at a joint AAST-SAGES session. “We had past, present and future presidents of both societies presenting and it was standing room only! It had taken an immense amount of work to bring it all together and seeing the response from SAGES membership made it all worthwhile. This would not have been possible without Rob’s expertise and friendship.”

The fact that Acute Care Surgery has recently become one of the top five topics of interest to SAGES members continues to inspire Dr. Cripps. “I definitely plan on being a lifelong member of SAGES! My plan is to stay active and help provide the next generation of leaders and members all the support and education that I can deliver.”

An active martial arts enthusiast, Dr. Cripps balances his passion of Acute Care Surgery by practicing Brazilian Jiu Jitsu and Taekwondo with his two kids. Last year, he and his family moved to Colorado and are also all enjoying skiing, hiking and fly fishing.