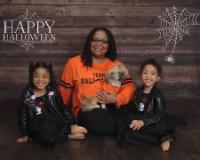 If there’s a consistent theme among SAGES members, it’s that SAGES is FUN—a sentiment also shared by Dr. Kellie McFarlin.

“What makes SAGES special compared to other associations is that it’s always advancing, showing the latest in surgical innovations and always keeping learning fun,” says Dr. McFarlin, adding that her favorite aspect of being a SAGES member is access to top training and video courses for her residents.

Dr. McFarlin was initially introduced to SAGES committees by Dr. Vic Velanovich and mentored over the years by a number of SAGES members, including Drs. Butch Rosser, Patricia Turner, Ross Goldberg, Patricia Sylla and Sharona Ross.

Most SAGES members likely know that Dr. McFarlin is mom to twin girls Brooklyn and Kathryn (and a dog not surprisingly named Leia!). What they likely don’t know is that she conducted ultrasound and minimally invasive surgery experiments on NASA’s retired KC-35 (otherwise known as the Vomit Comet) as a NIH Research Fellow and that she was women’s foil team captain in college.

What fellow members can be assured of is that Dr. McFarlin plans to be a long-term SAGES member. “Nothing can replace the energy that SAGES brings to the field of surgery. It not only represents the best in innovative surgery, but also surgical camaraderie.”