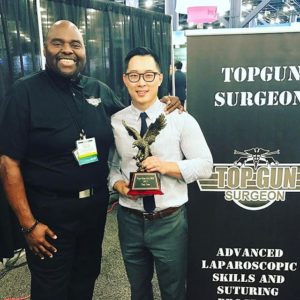 Many members regularly refer to SAGES as family. For Dr. James “Butch” Rosser, SAGES is the “Jedi Club” for cutting edge laparoscopic surgeons.

Since joining SAGES in the early 90s as a young attending surgeon in Ohio, Dr. Rosser’s ongoing participation has elevated him to Jedi Master status. His interest and focus on technology, innovation and education has kept him involved in a number of committees as well as the SAGES board and annual meeting.

He’s been active creating training videos (eg. laparoscopic cholecystectomy) for the meeting’s Learning Center and, for the last decade, has been the chair and face of the meeting’s annual Mini Med School for local high school students. Dr. Rosser calls the immersive and interactive experience great exposure and one of the best ways to promote a surgical career.

Like Mini Med School, Dr. Rosser says memorable SAGES experiences tend to repeat themselves with each annual meeting. He does highlight his Gerald Marks lecture in Philadelphia in 2008 as one of his most memorable experiences. In that talk—that you can watch here https://www.youtube.com/watch?v=z3vVYsEP74I–Dr. Rosser talks about the importance of a life of service after a near-fatal car accident. During his many years as a SAGES member, he also counts many mentors “who’ve gone on to do great things,” including Drs. Steve Schwaitzberg, Desmond Birkett and Dan Jones.

Outside of SAGES and surgery, Dr. Rosser wears many more hats as an inventor, futurist, social advocate, actor, playwright, video gamer, comic book collector, author and television personality. In fact, When Dr. Rosser says he’s “been in the media for quite some time,” that’s an understatement. The cliff notes of his media resume include more than 350 invited lectures around the world, more than 60 peer-reviewed articles, 16 book chapters, TED talks, appearances on most major TV networks and an Emmy nomination in 2013 for the Dr. Oz show on the Atlanta Heartburn Clinic.

It also includes more than 16 documentaries, including most recently—and most personally—Dr. Rosser’s documentary on the Mediflix streaming service, “More Than What We See, An Obesity Journey.” The two-part film, which you can watch at http://www.mediflix.com/video/obesity-part1?utm_source=Members%20Spotlight&utm_medium=Newsletter&utm_campaign=SAGES shows Dr. Rosser’s triumph over losing  weight and his wife Dana’s challenges along his journey. You can also watch the Rosser’s appearance on the Today show earlier this year here: https://www.today.com/video/couple-shares-toll-obesity-takes-on-relationships-131828805754

As Dr. Rosser and Dana continue to promote the documentary, you can expect Dr. Rosser to remain a fixture at future SAGES meetings as his “love affair” with SAGES continues.