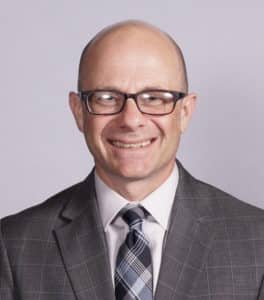 Even after many years as a member, Dr. Dmitry Nepomnayshy’s most memorable SAGES experience is still the 007 spoof of his chairman and SAGES president Dr. Desmond Birkett at the 1998 annual meeting in Seattle.  Dr. Nepomnayshy was a resident, and it was an amazing opportunity to spend time with his mentor at the meeting and the social events after. He says, “Being together at the meeting helped me see him in a different light. It helped us become friends rather than just having a chair/resident relationship.”

As is the case with many members, the fun and camaraderie of the annual meeting was initially the main attraction for joining SAGES. But for Dr. Nepomnayshy, a graduate of the Ohio State University College of Medicine, “It’s always so fun and exciting to see new techniques and equipment,” adding that SAGES “is a quick moving society where in many committees things change and move forward quickly.”

He credits another former SAGES President, Dr. Dan Jones, for initiating his involvement on various SAGES committees, including Advocacy & Health Policy, FLS and Continuing Education. “I have come to learn so much about different aspects of ‘how the world works’ as a result on being on committees,” he says. “I’ve learned more than provided in return as a result of serving. Among other things, I’ve learned how to write test questions, how to create an educational product from scratch and how to calculate an RVU.”

While he continues to take advantage of the many opportunities to learn and make friends within SAGES, in his downtime the New Englander also plans to continue enjoying his favorite outdoor sports: skiing and paddleboard surfing. But he stresses the latter will likely have to wait until spring. “People surf here even when it snows in the dead of winter. I don’t do it in winter, but have done it when the water temp is in the low 40s. A good wet suit really helps!” Brrr….