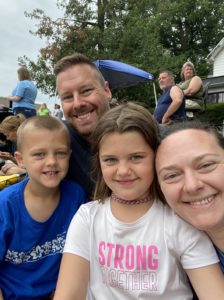 Dr. Amber Shada was initially urged to attend SAGES 2010 annual meeting in Washington D.C.  by her residency mentor Dr. Bruce Schirmer, after which she joined SAGES as a fellow at the urging of Drs. Christy Dunst, Kevin Reavis and Lee Swanstrom. “SAGES is the preeminent society for laparoscopic and endoscopic surgeons, and I became an active member recognizing its value not just for my own practice but for all of the trainees I work with.”

Those initial mentors, , are now part of a list of mentors that Dr. Shada says has become too many to count. “As I have become increasingly involved, I could list dozens of SAGES members who have shaped my career in a meaningful way and continue to do so.”

Current co-chair of SAGES Flexible Endoscopy committee, Dr. Shada has also been active in the Educational Resources and Continuing Education committees. This involvement has included her overseeing the Train the Trainer courses that prepare SAGES ADOPT course faculty to be expert operative instructors.

She says it’s the number of mentors and “hands down all of the gifted surgeons willing to share their talents and help mentor the next generation of surgeons is what makes SAGES so special. SAGES has a real focus on surgeon development, from early career development to technical skill development for practicing surgeons. My favorite SAGES recurring activity is the fellows advanced endoscopy course, which is held annually and generates so much excitement surrounding endoscopy for the fellows.”

The annual meeting is, of course, the other recurring annual event that generates excitement for SAGES members and Dr. Shada, who was honored to interview Dr. Swanstrom during the Pioneers of Foregut session in 2019 in Baltimore. https://www.youtube.com/watch?v=n_t_kioNHeE

Looking ahead at her SAGES involvement, she says, “I’ll continue to push endoscopic training back into the forefront of general surgery resident training, and work to interface with interventional radiology and gastroenterology to provide cutting edge minimally invasive GI surgical care that crosses disciplines.”

It looks like Dr. Shada, a former weightlifter and college equestrian who still lifts, practices gymnastics and rides in her spare time, will also continue to push herself physically– which should help keep her in top surgical shape!