INVOCELL® Intravaginal Culture System is a two-piece, single use device system. Using this system can reduce costs associated with lab fees for In Vitro Fertilization (IVF) or Intra-Cytoplasmic Sperm Injection Fertilization (ICSI) by allowing women to use their vaginal cavity as an incubator during fertilization and early embryo development for up to 72 hours. The Culture Device is a 1 x 1.5-inch gas permeable plastic container used to prepare, hold, and transfer up to 7 gametes or embryos during IVF or ICSI procedures. Gas permeability allows for pCO2 equilibration between the vagina and culture medium to maintain a pH of 7.2 – 7.4. The Retention Device helps hold the Culture Device in the vagina.

Data submitted by INVO Bioscience at the time of application found no significant difference for rates of fertilizations and cleavage when comparing traditional IVF / ICSC to INVOCELL.1 The efficacy of the device has been further evaluated in both a retrospective nonrandomized study2 and prospective randomized open-label controlled single-center study3. In the former, pregnancy rate, implantation rate, and miscarriage rates for INVOCELL ICSI were similar to conventional ICSI procedure rates.2 In the later study, IVF created superior quality blastocysts; however, both IVF and IVC with INVOCELL produced identical blastocysts for transfer resulting in similar live birth rates.3

INVOCELL® Intravaginal Culture System was approved via the de novo premarket review pathway and is not substantially equivalent to any predicate devices.

Should not be used in patients with hypersensitivity to medical grade silicone or polystyrene, in patients with a severe case of vaginitis or with a history of toxic shock syndrome, or those who cannot tolerate placement of a device in the vaginal cavity. 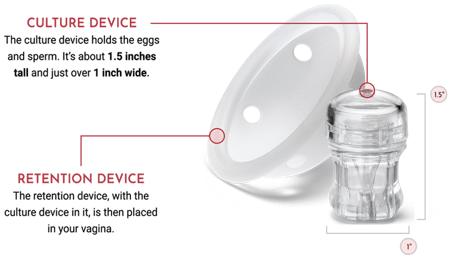