What Are the Incidence and Timing of Cholecystectomy After Bariatric Surgery?

BACKGROUND
Obesity and rapid weight loss are major risk factors for the development of cholelithiasis. Patients after bariatric surgery are at increased risk for gallstone formation and subsequent cholecystectomy. Our objective was to assess the incidence of cholecystectomy after different bariatric procedures and the timing it occurs after surgery.
METHODS
Patients who underwent cholecystectomy after bariatric surgery at a center of excellence between 2005 and 2011 were identified and their data reviewed. Age, body mass index (BMI), gender, pathologic diagnosis, and the time interval between the bariatric procedure and the cholecystectomy were recorded. The incidence of cholecystectomy after each procedure was calculated and compared using chi square. Data are presented as mean±s.d. A p-value <0.05 was considered significant.
RESULTS
The records of 1751 patients after bariatric surgery were reviewed; 1271 (72%) had prior laparoscopic Roux-en-Y gastric bypass (LRYGB), 349 (20%) laparoscopic adjustable gastric banding (LAGB), and 131 (8%) laparoscopic sleeve gastrectomy (LSG). Seventy four (4.2%) of these patients required laparoscopic cholecystectomy during follow up that ranged between 2 weeks and 68 months. There were no conversions and no major complications. 89% were females and 59% Caucasians, with an average age of 40±10 years. At the time of cholecystectomy, BMI had decreased to 36±8 kg/m2 from a preoperative value of 45±7 kg/m2. Sixty eight patients had undergone LRYGB (5.3% incidence), 4 LAGB (1% incidence), and 2 LSG (1.5% incidence) (p<0.001). The pathology of the gallbladder specimen showed cholelithiasis without prominent inflammation in 32%, chronic cholecystitis in 30%, acute cholecystitis in 8%, and was normal in 30% (dyskinesia). Cholecystectomy rates declined over time (incidence of 55.4%, 21.6%, 14.9%, 5.4%, and 2.7% at 1, 2, 3, 4, and 5 years follow-up respectively) and were highest during the first 6 months after surgery (33.8% versus 21.6% for the next 6 months postoperatively).

CONCLUSION
The incidence of cholecystectomy is highest during the first 6 months after bariatric surgery but is overall low at 4%. Gastric bypass patients are more likely to require cholecystectomy compared to band and sleeve patients. Few patients have their gallbladders removed due to acute cholecystitis and one in three have it for biliary dyskinesia. These findings may have important implications for preoperative counseling of patients undergoing bariatric surgery. 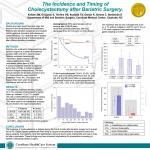