Weight Regain Does Not Impact Remission of Diabetes After Gastric Bypass

INTRODUCTION: Surgical treatment of morbid obesity leads to weight loss and remission of diabetes in most patients with type 2 diabetes mellitus (T2DM). Long term weight regain is seen in a subset of patients, but little is known regarding its relationship to remission.

RESULTS: T2DM was seen in 170 of the 652 patients (26.1%) preoperatively. Mean length of follow-up after surgery was 2.88 years. 82.7% of patients with T2DM at the time of surgery were in remission at last follow-up. Average maximum excess weight loss (EWL) was 77.1%. Weight regain occurred in 66.7% of patients and averaged 19.1% of maximum EWL. Recurrence of T2DM after remission occurred in 5.8% of patients. These patients had significantly longer duration of T2DM (12.3 vs 6.0 years) and more commonly used insulin (75% vs 18%,) than patients without recurrence. Maximum %EWL and weight regain were not significantly different between groups.

CONCLUSIONS: Weight regain after LRYGBP is common, but not associated with remission. Recurrence of T2DM after remission is seen in 5.84% of patients, and is associated with longer duration of T2DM and insulin use. Early surgical intervention for morbidly obese patients with T2DM should be recommended to maximize remission rates. 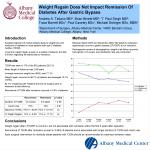