METHODS AND PROCEDURES: Water-jet assisted submucosal dissection was performed on eight porcine ex vivo upper gastrointestinal specimens using the ERBEJET™2 console with the HybridKnife multi-function probe. Pressure effect settings were increased in increments of 5 across a range of 20 – 60 (1 effect setting = ~100kpa). The submucosal space was accessed from pre-prepared 10mm mucosal incisions in the posterior esophagus located 10 cm proximal to the gastro-esophageal junction. The water-jet was deployed from a static position for 10 seconds at zero degrees of angulation using methylene blue stained normal saline. Length and width of submucosal elevation, as well as inadvertent perforations were assessed for each effect setting (Figure 1a). 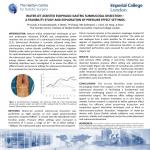