INTRODUCTION: Bipolar energy can cause thermal injury to adjacent organs when used improperly. SAGES FUSE curriculum provides didactic knowledge on principles and best practices for safety, but there is no hands-on component to practice these skills.  The objective of this study is to compare the effectiveness of the VESTTM Bipolar training module in addition to the FUSE Curriculum.

METHODS AND PROCEDURES: The study was a mixed design with two groups, control and simulation. After a pre-test that assessed their baseline knowledge, the subjects were randomized to two groups. Both groups were given a 10 min presentation, reading materials from the FUSE manual and an online didactic module on bipolar energy. The simulation group also practiced on the simulator for one session that consisted of five trials on the effect of activation time on thermal damage and the importance of providing a margin of safety by sealing short gastric vessels. After one week the performance of both groups was assessed using a post-questionnaire. One week after the post-test both groups performed sealing of 10 vessels on an explanted porcine mesentery with vessels perfused. Their performance was videotaped and their activation times were recorded. A total safety score was calculated by assessing the proximity of the location of activation to the intestine by two independent raters. Wilcoxon – Signed Rank and Mann-Whitney U tests were used to assess difference within and between groups.

RESULTS: A total of 16 residents (8 in each group) participated in this IRB approved study. Median test scores for both groups increased (Simulation, p = 0.041 and Control, p = 0.027). No difference was found between the two groups in their pre-test (p = 1.0) and post-test (p = 0.955) scores indicating learning. The median total activation time for control group was higher (42.55 seconds) compared to simulation (30.6 seconds) but was not statistically significant (p = 0.336). There was a moderate agreement between two raters for margin of safety (kappa = 0.58, p < 0.001). Total safety scores showed no difference between the two groups (p = 0.573). 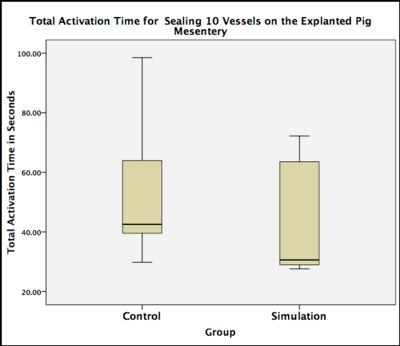