Videolaparoscopic Splenectomy for Malignant Hematologic Disease of the Spleen: The Therapy of Choice? A Retrospective Series of 55 Cases.

INTRODUCTION: Nowadays, Laparoscopic Splenectomy (LS) is considered the treatment of choice for the benign hematologic diseases of the spleen. However the role of LS in malignant hematologic diseases is still controversial. Technical difficulties related to splenomegaly, splenic ilum enlarged nodes and consequent hemorrhagic risk, the need of pathological characterization of malignant disease on entire removed spleen, should be considered contraindications to LS in malignancies. The aim of this study is to compare efficacy and feasibility of LS for hematologic malignancies and patients outcome with benign disease patients who underwent the same procedure.

METHODS AND PROCEDURES: Between January 2001 and May 2012 in two affiliated university hospitals, 117 patients underwent to LS for hematologic disease. Retrospectively, patients were shared in two groups: group A (62 pz.) with preoperative diagnosis of benign hematologic disease and group B (55 pz.) with malignancies. For each group were evaluated bipolar spleen diameter, mean operative time, conversion rate and causes, postoperative complications and need of transfusion. The statistical analysis was realized with Fisher exact test and Mann-Whitney U test using the open source program “Openstat” by WG Miller – June 2012.

RESULTS: Median splenic diameter was greater in group B (mean 17,05 cm) than in group A (mean 14,45 cm) with a statistically significant difference (p<0.005), such as higher were the number of accessory mini-laparotomy (group B=52,72% vs A=17,74% p<0,005)) and conversion rate (B= 18,18% vs A4,83% p=0,022) in the group of patients with diagnosis of malignancy. The mean operative time was 123,87 min. in group A and 148,1 min. in group B (p<0,005). Besides, there weren’t significant differences about the need to intra-operative and post-operative transfusions and incidence of post-operative complications among the two groups of patients. No mortality occurred.

CONCLUSIONS: The analysis of our data highlights that LS for hematologic malignancies is effective and feasible even if associated to a higher conversion rate compared with LS for benign disorders due to splenomegaly and difficult ilum dissection, more frequent in malignancies. Besides, no differences in the outcome of patients (blood loss, morbility and mortality) was noted among the two groups. We can conclude that LS as to be considered a safe procedure in treatment of hematological malignancies of the spleen as stated in the EAES consensus statement on laparoscopic splenectomy (2008) 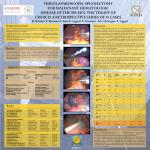