Video-Assisted Thoracoscopic Pulmonary Wedge Resection in a Patient with Hemopytsis and Intralobar Sequestration: A Case Report

Case Report: A 19-year-old male with history of Noonan’s syndrome, bronchitis, and asthma presented with acute hemoptysis.  While chest x-ray was unremarkable, a computed tomography angiogram of his chest was significant for intralobar pulmonary sequestration in the right lower lobe.  The aberrant pulmonary artery originated from the abdominal aorta, immediately proximal to the celiac axis, and coursed through the hiatus in the retroperitoneum. Flexible, fiberoptic bronchoscopy revealed blood within the right lower lobe bronchus with no appreciable source.  A right video-assisted thoracoscopic approach was taken for wedge resection of the sequestration.  Two-portal technique was utilized with the patient on single lung ventilation.  The sequestration was easily identified; the anomalous pulmonary artery coursed directly to a large, focal area of hemorrhage noted within the lower lobe pulmonary parenchyma, as seen in Image [rectangle marking the aberrant artery and oval marking the sequestration]. Pathologically, the specimen was noted to be benign lung parenchyma with bronchiectasis and abundant, acute hemorrhage. 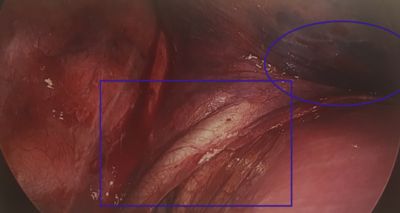 Discussion: Pulmonary sequestration (PS) is a rare, congenital bronchopulmonary foregut malformation.  Literature describes the incidence of PS to be only 0.15-6.4% of all pulmonary malformations.  As PS is most frequently diagnosed during childhood, the occurrence of diagnosis during adulthood is estimated to be less than 3 per 10,000 adults.  Two types (intra- and extralobar) are described, with intralobar sequestration most common and contained within the normal visceral pleura.  Both types have aberrant systemic arterial blood supply, most frequently from the thoracic aorta.  Likewise, both types are nonfunctioning lung tissue, as there is no direct communication with the bronchopulmonary tree. The most common presentation is pneumonia, and often patients will have had recurrent symptoms before diagnosis.

It is rare to present with hemoptysis, which is understood to be secondary to elevated capillary pressure within the sequestration and then communication through the pores of Kohn.  While endovascular embolization of the aberrant pulmonary artery has been described as a safe alterative for surgical intervention, the subjects of these studies have primarily been children and long-term outcomes are unknown.  The definitive treatment of PS continues to be surgical intervention. The surgeon should strive to leave as much normal lung parenchyma as possible.  Video-assisted thoracoscopic resection is well tolerated by patients when compared to thoracotomy.  However, it is vital for the surgeon to be aware of the potential risk of life-threatening hemorrhage secondary to the sequestration having systemic blood supply that must be controlled and ligated.