Background: While barium contrast (Ba) is the most commonly used method in the diagnosis of paraesophageal hernias (PEH), it is impractical for long-term patient follow-up post repair, given its cost, radiation exposure, procedure time and lack of patient compliance. PEH’s can be visible on chest X-ray (CXR) specially when they are large in size, however it’s diagnostic accuracy is unknown. The purpose of this study was to determine the accuracy of CXR for the diagnosis of PEH in two clinical settings: 1) patients without PEH surgery to measure the accuracy of CXR as a diagnostic tool and 2) patients after PEH surgical repair, to evaluate the accuracy of CXR as a follow up surveillance method.

Methodology: A retrospective case-control study was conducted between 1997 to 2014, including patients who were evaluated with both Ba and CXR within 6 months apart. The setting without PEH surgery was composed of preoperative patients who were identified from a database of foregut surgery and diagnosed with a PEH by Ba; symptomatic patients evaluated for PEH using Ba were randomly selected from a large institutional database as their controls. The post-operative setting included patients who were identified from the foregut surgery database, underwent PEH surgical repair and had Ba as well as CXR studies >4weeks after surgery.Three radiologists evaluated the CXR’s for the presence or absence of PEH on a dichotomous (yes/no) scale. They had different levels of experience (R1: 40 years; R2: 10 years; R3: current radiology fellow), and were blinded to the diagnosis and patient identity. The sensitivity, specificity, positive predictive values (PPV), negative predictive values (NPV) and accuracy of CXR in diagnosing PEH were calculated using Ba as the gold standard. Data are shown as Median [75th percentile-25th percentile].

Results: Eighty-nine adult patients were assessed. Fifty-four cases were included in the setting of patients without PEH surgery (27 preoperative patients with PEH; 27 control patients without PEH); thirty-five patients were included in the post-operative setting (13 with PEH recurrence; 22 without PEH recurrence); the median time of the CXRs taken after surgical repair was 5 [2-8] months. The diagnostic accuracy of CXR was similar among experienced radiologists when used as a diagnostic tool (92% vs 92%), but varied when used in the post-operative setting to detect recurrences (71% vs 82%). However, when experienced radiologists agreed on the diagnosis; the sensitivity, specificity, PPV, NPV, and accuracy were higher in both clinical settings (Table 1).

Conclusion: This pilot study provides data to support the utility of CXR in the diagnosis of PEH. An agreement between the interpretations of the CXR between 2 experienced radiologists can enhance the accuracy of this technique in postoperative patients. Based on these results, a prospective study evaluating the accuracy of serial CXR assessment in diagnosing postoperative PEH recurrence is justified. 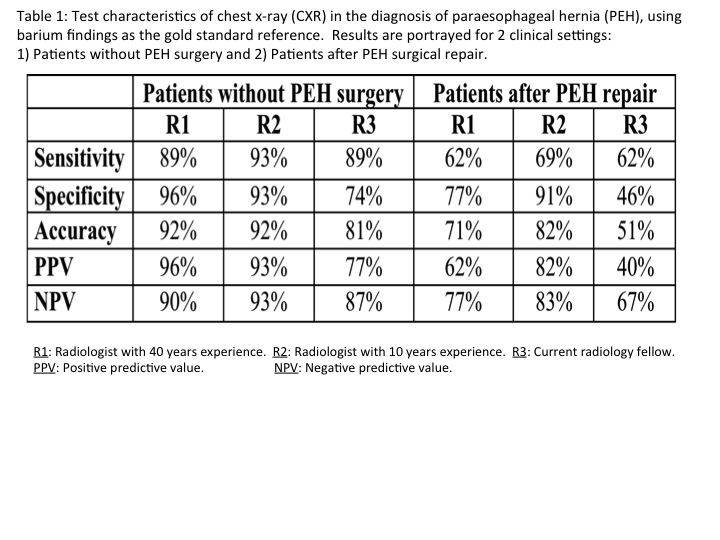