Using ROTEM® to Evaluate the Relationship Between Obesity and Hypercoagulability. Are we doing enough?

Introduction: Venous thromboembolic (VTE) disease is a rare life-threatening condition, yet one of the most commonly reported causes of death after bariatric surgery. Prevention is critical; however, ideal agents, dosage, bleeding risk and methods of monitoring complicate treatment prophylaxis. In an attempt to determine optimal prophylactic anticoagulation dosing, we used Rotational Thromboelastometry (ROTEM®) to identify baseline coagulopathy and the change in same following subcutaneous enoxaparin in obese patients undergoing bariatric surgery.

Methods: We conducted a prospective study including patients eligible for bariatric surgery, > 18 years of age, and without any known underlying coagulopathy. Baseline coagulation state was determined during the routine pre-operative testing appointment. Following surgery, the patient received 40 mg subcutaneous enoxaparin within 2 hours and a second dose of 40 mg at 4 am on post-operative day one. The post-operative ROTEM® was performed approximately 2 hours after the second dose of enoxaparin. Patient demographics and characteristics were gathered, including: age, gender, body mass index (BMI), smoking history, presence of comorbidities (diabetes, hypertension and obstructive sleep apnea), Table 1. All ROTEM® analyses were interpreted by an experienced surgeon blinded to patient identity, characteristics and timing of ROTEM® testing, Table 2A and B.

Results: Forty patients meeting inclusion criteria were consented, enrolled, and completed the study. The majority of the patients were female (82.5%). The average patient was revealed to be morbidly obese (mean BMI of 43.6) and 44 years of age (Table 1). The ROTEM® analyses (Table 2) showed over half (57.5%) the patients were hypercoagulable at baseline. The second ROTEM® results showed 57.5% of patients as hypercoagulable and 42.5% normal, representing no statistically significant change from baseline (P = 1.000). Two patients had baseline hypocoagulability and became hypercoagulable post-operatively despite two doses of enoxaparin.

Conclusions: The results imply that obese patients may be inherently hypercoagulable. Despite two doses of 40 mg of subcutaneous enoxaparin approximately every 12 hours, no patient became hypocoagulable. Thirty-five (87.5%) patients clearly had insufficient dosing; while only five patients seemingly had adequate dosing evidenced by their shift from a hypercoagulable to a normal coagulable state. These findings suggest that two doses of enoxaparin are ineffective in achieving the desired prophylaxis in obese patients undergoing bariatric surgery. 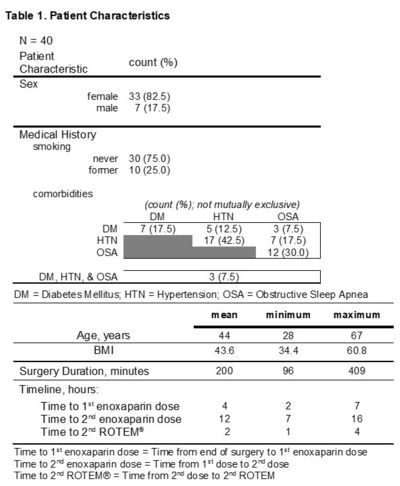 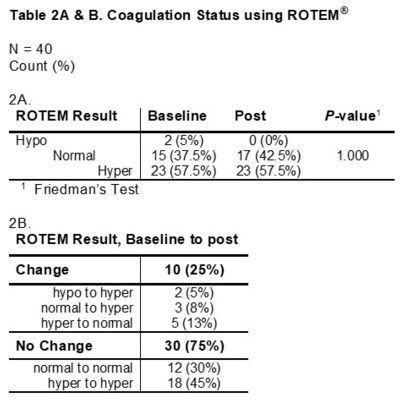