INTRODUCTION – Emerging data suggest that laparoscopic colorectal resection for cancerous and precancerous lesions has oncologic outcome comparable to the open approach, with the advantage of earlier postoperative recovery and lower complication rate. The aim of this study was to examine the pattern of its use among patients of advanced age in urban community hospital and the short-term perioperative outcome.

METHODS AND PROCEDURES – We performed a retrospective chart review of all patients who had undergone colorectal resection for cancerous and precancerous lesions between 1/1/2005 and 12/31/2010 in a single urban community hospital in New York. Patients were stratified into 3 groups: age <65, age 65-79 and age ≥80. Comparisons were made between laparoscopic and open cases among and across each age group. Variables thought to influence the choice of laparoscopic vs open technique were examined including ASA class, BMI, and preoperative diagnosis. Short-term outcome measures included length of stay (LOS), surgical site infection (SSI), cardiopulmonary complications, requirement for transfusion, sepsis or septic shock, and 30-day mortality, readmission, or reoperation.

CONCLUSION – Patients of more advanced age who underwent colorectal resection of cancerous and precancerous lesions were of higher ASA class and had more advanced disease. While these patient characteristics remain comparable between the laparoscopic and open surgical group, the short-term postoperative outcome was superior in those who underwent laparoscopic resection as evidenced by shorter LOS and lower readmission, reoperation and mortality within 30 days postop. Laparoscopic colorectal resection for cancer should be considered more often in elderly patients. 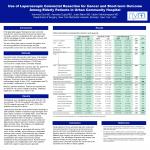