Use of laparoscopic approach in gastric tumors at the National Cancer Center (MEXICO).

Introduction: At the Department of gastrointestinal tumors in the National Cancer Center, gastric tumors are the most frequent pathology treated at the department after colorectal cancer. The mean number of patients diagnosed per year is around 145, noticing an increased number year after year. The most common tumors are adenocarcinoma followed by gastrointestinal estromal tumors, linfomas and leiomiomas. At diagnosis most of the cases are metastatic diseas followed by locally advanced disease.

Methods and procedures: Retrospective study. We review the charts of patients with gastric tumors treated by laparoscopic approach from March 2010 to June 2013. Statistical descriptive was used for the variable analysis.

Results. In a total of 60 cases with gastric tumors laparoscopic surgery was chosen as initial approach. 45 cases were staging laparoscopies in patients previously diagnosed with locally advanced disease but with elevated CEA, large volume tumor, or doubt by CT of having carcinomatosis. Of this group 18 cases were found to have peritoneal carcinomatosis and so an unnecessary laparotomy was avoided as well as neoadyuvant treatment with quimioradiotherapy. In this group 2 laparoscopic yeyunostomies were performed, and 4 palliative gastroyeyuno anastomosis. The rest of the cases were converted to continue either subtotal gastrectomy, total gastrectomy, and in locally advanced non obstructed cases neoadyuvant quimioradiotherapy was indicated. A patient with locally advanced diseases infiltrating the pancreas and with gross node disease with poor funtinal outcome was performed a laparoscopic gastroyeyuno anastomosis so she could received neoadyuvant treatment and months latter she was treated with total gastrectomy. We had a case of obstructing duodenal lymphoma that was treated with gastroyeyuno anastomosis. We have five cases of gastrointestinal stromal tumors, 4 of them treated with wedge laparoscopic resection and one that required a laparoscopic antrectomy. We had 4 cases of subtotal gastrectomies with lymph node dissection, and one total gastrectomy with lymph node dissection that requires convertion at the time of the esofagoyeyuno anastomosis. In total we have 3 convertions, and morbidity of 12% and mortality of 1%.

Conclusion. Laparoscopic staging is a very useful approach in locally advanced cancer avoiding unnecessary laparotomies and neoadyuvante treatmente in stage IV desease. A lot of oncologic procedures in gastric tumor can be performed safely and preserving the oncologic principles, but in center where laparoscopic approaches are not that common learning curve is slow, but we are starting to increase the number of cases performed at our center. 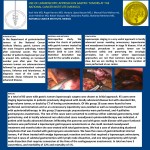