Methods: Sixty patients with rectal cancer identified by pre-op colonoscopy were recruited. One milliliter carbon nanoparticles suspension was endoscopically injected into the submucosal layer at four points around the site of the primary tumor one day before surgery. Laparoscopic radical resection with D3 lymphadenectomy was performed. Decision-making lymph nodes were defined as nodes that were black-dyed by carbon nanoparticles around inferior mesenteric artery between left colic artery and abdominal aorta. Pathology confirmed consistency between decision-making lymph nodes and all D3 lymph nodes.

Conclusions: It is feasible to use carbon nanoparticles to show decision-making lymph nodes around inferior mesenteric artery in rectal cancer. 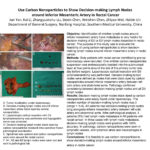