Introduction : Despite improvement in surgical approach and technology, total mesorectal excision for low rectal cancer has been associated with significant post-operative sexual and urinary dysfunction. We hypothesize that robot-assisted laparoscopic total mesorectal excision can achieve maintenance of such functions by its more assured pelvic splanchnic nerve preservation.

Method: We prospectively assessed the pre- and post-operative sexual and urinary function of male patients who received robot-assisted laparoscopic total mesorectal excision for rectal cancer since May 2009. The International Prostatic Symptom Score (IPSS) and International Index of Erectile Function (IIEF-5) were employed for such assessment. The baseline and the post-op 3 months assessments of sexual and urinary function were analyzed and compared.

Conclusion: In contrast to traditional open or laparoscopic total mesorectal excision, our preliminary data in robot-assisted laparoscopic rectal cancer excision is encouraging and suggests that robot is more than just a surgeon’s tool but the clarity of the surgeon’s view and the ease by which the surgeon operate can be translated into better functional outcomes in our patients. 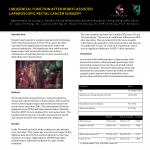