Methods: An online survey designed by SMART committee members to define SAGES member’s status with Enhanced Recovery principles and practice was emailed to all SAGES members, encouraging completion of the survey. A reminder was sent at 4 weeks. The web-based survey was comprised of 48 items, and took an estimated 20 minutes to complete.

Results: 228 members completed the survey. Respondents were primarily male (87%), general/MIS surgeons (82.6%) working in an urban location (85.5%), with a bell-shaped age distribution (median 35-44). Almost half regularly used some elements of ERPs (48.7%), but 30% were unfamiliar with the concept. Wide variety in the specific elements of ERPs employed and discharge criteria were reported. Standard ERPs were not used across abdominal surgery service lines (66.4%) or surgeons (53.1%). The majority had to create and implement their own plan (70.4%). Roadblocks to implementation were inconsistencies with partners/covering physicians (56.3%), nursing education (46.6%), and resources (34.7%). When implemented, members saw improvements in length of stay (88%), patient satisfaction (54.7%), postoperative pain (53.3%), time to return of bowel function (52.7%), normal activities (40%), and readmissions (16.7%). A need for education and standardization was especially seen in preoperative care, with 51.1% routinely using oral mechanical bowel preparations and 74.4% fasting patients from midnight the night before surgery. Wide variations were also reported in perioperative pain management and postoperative analgesia. For respondents that failed to successfully implement ERPs, the most common reasons were lack of education (35.3%) partner disinterest (41.2%), and lack of support from hospital administration (30%). An overwhelming majority (89%) reported having a protocol endorsed by a national organization, such as SAGES, would help with implementation.

Conclusions: From this survey of the SAGES membership, there is a need to provide education, tools and standardized protocols to increase awareness, implementation, and widespread utilization of ERPs. The overwhelming majority stated having a protocol endorsed by a national organization, such as SAGES, would help with implementation. 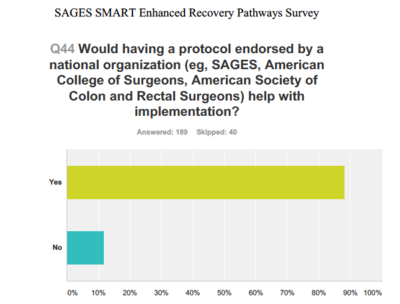