Unusual complication in use of permanent tack in laparoscopic surgery

Laparoscopic repair with mesh placement has become a common method of ventral or incisional hernia repair over the years. Intraperitoneal onlay mesh placement is commonly performed laparoscopically, and the mesh is generally fixated to the abdominal wall using transabdominal sutures, tacks, or both of these. However, long term risk of non-absorbable tack in laparoscopic hernia repair is not completely known.

A 84 year old female presented with chronic infected mesh and associated abscess. Patient had history of multiple laparatomies and underwent laparoscopic ventral hernia repair with synthetic mesh six years ago. Her past medical history included diabetes mellitus and obesity. The infection and abscess had been treated with percutaneous drainage but failed. She was scheduled for laparoscopic excision of the mesh and ventral hernia repair. Peritoneum was entered laparoscopically, and dense omental adhesion to the mesh was taken down. A loop of incarcerated small bowel was identified with multiple spiral titanium tacks eroding through the bowel wall. There was a fistula between the abscess and the bowel where the tacks were eroded. In addition, multiple serosal injuries were noted along the incarcerated segments of the small bowel. The mesh was bunched within the hernia sac. The case was converted to open laparotomy due to extensive adhesion, and the mesh was excised. The incarcerated and eroded small bowel was resected with side-by-side anastomosis. Postoperatively, she developed an intraabdominal abscess which was treated with IV antibiotics and drainage. To the current date, she is doing well without further infection and recurrence.

In hernia repair with mesh placement, the ideal fixation method remains a highly debated topic. At this time there is no ideal method or device that has been identified. There are cases of complications using tacks in the literature, including small bowel obstruction, tack hernia, volvulus, liver hemorrhage, hemopericardium, and etc. This case of a chronically infected mesh with tack erosion into the small bowel demonstrates an unusual complication of use of spiral titanium tacks for mesh repair of a ventral hernia. Additional research is needed to explore the long term risks and benefits of the alternatives. 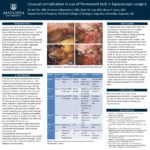