Introduction: Bowel dysfunction after Laparoscopic cholecystectomy (LC) is a common issue, yet little has been described on its progression. By prospectively following patients for two years after LC with a bowel dysfunction survey and clinic visits, we aimed to characterize the incidence and symptomatic profile of post-cholecystectomy bowel issues and look for conditions that associate with poor bowel outcomes.

Conclusions: Constipation and bloating largely resolve by postoperative week three, while severe urgent and loose BM persist in some patients in the long-term after LC. The incidence of urgent BM may be associated with postoperative weight gain. 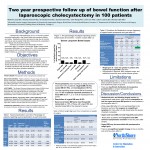