Trends and Outcomes of Esophagectomy in the United States, Data from the ACS-NSQIP, 2008-2014

INTRODUCTION: The objective of this study is to examine the trends and outcomes of esophagectomy after implementation of ACS-NSQIP.

METHODS AND PROCEDURES: The American College of Surgeons National Surgical Quality Improvement Program (ACS-NSQIP) database between 2008 and 2014 was used to obtain and analyze data for patients with esophageal cancer who underwent partial esophagectomy or total esophagectomy. Main outcome measures included 30-day mortality, serious morbidity, and length of stay. Outcomes were analyzed according to the first half of the study period (2008-2011) compared to the latter half (2012-2014).

CONCLUSION: From 2008-2014, there was an increase in the proportion of partial esophagectomies performed for esophageal cancer. There has been an overall reduction in average length of stay; however no notable improvement in serious morbidity or mortality since ACS-NSQIP has been implemented. Further quality improvement initiatives should be implemented to reduce the morbidity and mortality associated with esophagectomy. 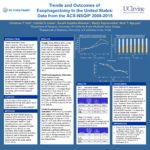