Methods and procedures: After confirmation of a small bowel obstruction requiring surgical treatment, patients were informed of the options including laparoscopic approach. After consentment, patients underwent a laparoscopic exploration to assess the feasibility of competing the operation with this technique. According to preoperative diagnosis and intraoperative findings, a definitive conduct was taken.

Results: From July 2010 to September 2013, 16 operations in 16 patients were identified. Age ranged from 21 to 86 years. There were seven men and eight women. Diagnostics are: small bowel adhesive obstruction, two inguinal hernias, one of them with bowel necrosis, one hernia of the Petersen´s defect and one postoperative port hernia after a gastric bypass. Additionall, two patients with endoluminal foreign bodies, both fitobezoar, and one patient with an appendiceal mass under medical treatment. One of the patients had an acute relapse of the adhesive obstruction, requiring reoperation, which was converted due to technical difficulties. Of them, three were converted to open. The appendiceal mass made impossible to identify anatomy; foreign body trapped in the ileocecal valve and therefore unidentifiable; and the first mentioned of the adhesions group. Complications found were an ileum perforation repaired laparoscopically during the initial intervention, prolongued ileus in seven patients. Mortality: A patient who had a bone marrow transplant a week before died, after a successful resolution of the obstruction,  due to sepsis caused by complete leucopenia. Patients in whose laparoscopic procedure was completed, recovered uneventfully and were discharged uneventfully. They have been asymptomatic in posterior controls.

Conclusions: Laparoscopic treatment of different obstructive pathologies can be practiced with good results. Experience in bowel manipulation is fundamental to avoid damages. Long term follow-up will help to determine the incidence of new episodes as compared to open surgery. 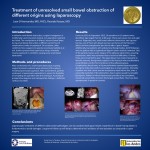