Treatment of the Appendiceal Abscess in Children-One Institution’s Experience

Background: The role of surgery in the initial management of appendiceal abscesses in children is unclear. The primary objective of this study was to compare outcomes of immediate appendectomy versus drainage and interval appendectomy. The secondary purpose was to evaluate abscess fluid for culture and susceptibility.

Methods: Patients less than 18 years with an appendiceal abscess were identified at a single tertiary children’s hospital from 2006-2011. Retrospective data on age, gender, length of symptoms, antibiotic use, complications, length of stay, and readmission were collected.

Results: A total of 100 patients were identified (55M:45F). Fifty-six patients were treated with intravenous antibiotics and drainage when feasible. Median age was similar in both groups. Complications during the initial hospitalization were noted in 26% of patients. The immediate appendectomy group was more likely to have a complication when compared to the interval appendectomy group (38.6% vs. 16.1%. p=0.01). Escherichia coli was noted to be the most common gram negative organism isolated from abscess fluid cultures.

Conclusions: Complication rates in this study were higher in patients who had an appendectomy done at initial presentation for appendiceal abscess. Interval appendectomy should be considered in this patient population. 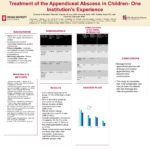