Treatment and Removal of a Double Gallbladder with Two Distinct Stone Compositions: A Case Report

Introduction
Duplication of the biliary system is rare and the incidence of a double gallbladder has been reported at one per 4,000-5,000 people. It is important for surgeons to be knowledgeable of the different anatomic classifications of a double gallbladder and also understand the treatment rationale for such a patient as it could complicate surgery. We present the rare case of a double gallbladder identified intraoperatively, despite preoperative imaging, with two separate and distinct acute pathologies.

Case Report
A 65 year old woman presented to the emergency department with acute onset right upper quadrant and epigastric pain. Physical exam was consistent with patient history and labs were significant for a mild elevation in liver function tests but normal bilirubin levels. Ultrasound examination was limited by bowel gas but identified cholelithiasis and dilatation of the common hepatic duct. Follow up imaging with CT scan demonstrated a serpiginous gallbladder with variable stones and a dilated CBD, but did not identify a redundant biliary system. Intraoperatively, a double gallbladder was identified and completely excised, and the remaining operation proceeded normally. A duplicated gallbladder with two discrete cystic ducts opening into two attached by separate gallbladders (Boyden type Y) was confirmed with pathology. Both demonstrated chronic cholecystitis with cholelithiasis, however with different stone compositions – large brown stone (cholesterol) and many small yellow-black stones (mixed stones). The patient was discharged home the following day with no complications.

Conclusions
Although a double gallbladder is a rare finding, it is not uncommon to discover biliary anomalies intraoperatively, and an awareness is needed to prevent complications and harm to the patient. Ultrasound and CT scan are highly specific imaging modalities for biliary pathology, but as demonstrated through our case report, they still have limitations and risk a missed diagnosis preoperatively. Management of a double gallbladder can be undertaken safely with laparoscopic removal of both gallbladders at the initial operation as this avoids morbidity related to recurrent biliary disease and repeat surgery. 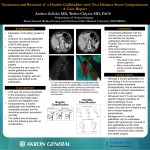