INTRODUCTION Laparoendoscopic single-site surgery(LESS) has been proposed for several intra-abdominal surgical interventions. Here, we share our ten cases to demonstrate the feasibility of LESS splenectomy using conventional instruments in the management of different kinds of splenic diseases.

METHODS AND PROCEDURES A total of ten patients who underwent transumbilical single-incision laparoscopic splenectomy between January 2010 to July 2011 at our institution were recruited: eight men and two women with a median age of 44 (range, 17–73) years, and body mass index of 22.3 (range, 18.6–22.6). Category of diseases included 3 cases of hypersplenism secondary to portal hypertension, 2 cases of splenic hemangioma and each for traumatic rupture of the spleen, splenic artery aneurysm, ITP, splenic cyst and congenital hemolytic anemia. Conventional laparoscopic instruments including a rigid 10-mm scope, Ligasure and the harmonic scalpel were used.

Visualization of the spleen and standard dissection of attachments was accomplished, and splenectomy was completed by stapling of the splenic hilum. The spleen was extracted through the umbilical incision.

RESULTS All the ten operations were successful with operative duration 115~240min,estimated blood loss 20~350ml and hospital stay 5~10days. One splenic hemangioma patient had postoperative bleeding and were reoperated by laparosopic exploration revealling splenic hilum bleeding which was controlled by suturing and ligation.

CONCLUSIONS SILS splenectomy appears to be a technically feasible alternative to standard endoscopic procedure and can be performed using conventional instruments by experienced hands. But improved cosmesis must be carefully weighed against the potentially increased difficulties and risks of the procedure. 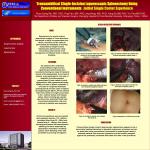