Background and study aims
Trans-umbilical single incision laparoscopy (SILS) is a recently popular means of minimally invasive surgery. It is associated with milder pain and better cosmetic appearance, which makesit attractive to many patients. Our study hasevaluated this technique andanalyzed the results for trans-umbilical single incision laparoscopic liver resection (SILLR) at a single institution from January 2010 to February 2013.

Patients and methods
Preoperative data of 17patients (8 hemangiomas, 2 hepatocellular carcinoma, 2 liver metastasis, 2 calculus of left intrahepatic duct, 3 liver adenoma) planned for SILS liver resection were analyzed. Operations included 7 wedge resection, 8 left lateral lobectomy, one with both methods of wedge resection and left lateral lobectomy and oneproximal left hemihepatectomysegmentectomy. Four patients underwent simultaneous laparoscopic cholecystectomy. Three ports were constructed through an umbilical incision. Vascular control established and lesions resected 1cm away from normal liver tissue. The specimens were placed in a bag and were extracted through the umbilical incision. All the patients were followed up for a minimum of 3 months.

Results
17cases were successfully operated through a single umbilical incision. Single incision surgery required 55 to 200 minutes to complete, with blood loss of 100 to 1000ml. Patients regained bowel activity 0.8-2.3 days after operationand weredischarged home after 7 to 15 days. However, intraoperative hemorrhage and bile leakage were the only complication that inevitably occurred.

Conclusions
Transumbilical SILS liver resection is challenging to perform through using conventional laparoscopic instruments. The risk of bleeding and technical difficulties is high for posterosuperior segment lesions. Cases should be chosen appropriately to optimize the benefits of this technique. 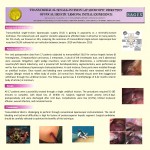