BACKGROUND: Aim of our study was to evaluate the short term outcome of single port transumbilical laparoscopic assisted appendectomy (TULAA) compared to the “standard” three port laparoscopic appendectomy in a case control study.
MATERIAL AND METHODS: 22 children operated on by transumbilical laparoscopic assisted appendectomy (TULAA) were matched with a control group of 22 children operated on during the same period of time by conventional three port laparoscopic appendectomy (LA) according to age, sex and histology of the resected appendix.
Patients were evaluated retrospectively for time to first and full oral intake, operative time, duration of hospital stay and intraoperative or postoperative complications.
RESULTS: There were no differences between the groups according to sex, age and histology, representing a good matching quality. The median operating room time for TULAA was 61mins and 55mins for LA. There were no intraoperative or postoperative complications and no conversions in both groups. Time to first oral intake was one day for TULAA and one for LA. All patients were on full oral feeds on postoperative day 2 in TULAA and LA. The median duration of hospital stay was 4 days (range 2-6 days) for TULAA and 4 (3-5) days for LA respectively. All results showed no significance between the groups.
The learning curve showed a decrease in operating room time. Adaptation to the 0°-videoscope and the partial blocking of the visual field when operating an instrument in the working channel was the most demanding and time consuming part of the procedure. Because only one instrument can be used, inspecting the small intestine to exclude Meckel’s diverticulum was very hard to perform, even in extreme Trendelenburg position.
DISCUSSION: TULAA appears to be a safe and successful alternative to three-port laparoscopic appendectomy in children. It wields the advantage of reducing the costs for surgery, because no stapling or endo-loop devices are needed. The postoperative course is similar as expected in “traditional” three-port laparoscopic appendectomy. Any additional procedure is harder to perform with only one instrument at hand. Performing larger scale controlled trials should be encouraged. 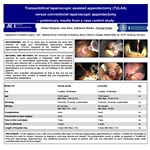