Transanal Endoscopic Microsurgery (TEM) is big step beyond local resection of rectal tumors. Although TEM has been in use for more than 20 years, it has been slow to become universally adopted by colorectal surgeons, in part because of a long learning curve, but also because of the significant cost of the highly specialized equipment and instrumentation. Disposable single-port surgery devices became available and have been used for Transanal Minimally Invaosive Surgery (TAMIS) with benefits, when compared with local resection and TEM.

A series of five patients with indication for local resection of rectal tumors was submited to surgery using the SSLTM device.The distance from anal verge was from 1 to 6cm and the tumor diameter was up to 5cm. Four patients had a initial diagnostic of adenoma. One patient had a previous endoscopic resection of a T1 adenocarcinoma, resected with endoscopic mucosectomy technique and the pathological margins were not completely free. Two of the four resected tumors contained early stage adenocarcinomas. All margins were free. One patient had a partial dehiscence of the suture line in distal rectum diagnosed on ninth post-operative day, and was treated without surgical re-intervention or other clinical measures.

Having minimal setup time, low cost and specially the adaptation of regularly used laparoscopic instruments, SSLTM provides an ideal platform for transrectal or transanal resection. The results of this technique using this novel device are encouraging, concerning the feasability, manouverability, upfront cost, setup time, resecability of the lesion and low complication rate. Because of its potential instrumental simplicity and similarity with conventional laparoscopic surgery, it can be learned easily by surgeons not used to TEM technique.

Although at the present time the appropriate use of local excision is still under debate, TAMIS is a technique that still expects a lot of growing and much remains to be learned. As others, our group is optimistic that SSLTM will come as a good alternative to TEM and one of the most import contribution for transanal surgery for years and due to its reduced cost and simplicity will allow a lot of surgeons to learn the technique quite easily. 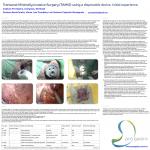