Aim: To evaluate the short term outcome of THD mucopexy in the management of prolapsing haemorrhoids.

Method: A prospective data was collected for all patients with symptomatic haemorrhoids and failed medical treatment that underwent THD in the period between February 2010 and August 2012 in a DGH colorectal unit. Overall median followed up was 6 months (range 1-12 months). Preoperative and postoperative symptoms were assessed along with post-operative complications.

Results: Fifty six patients (n=56) underwent THD in this period 34% with fourth degree and the rest with third degree haemorrhoids. 28% were females (age range 34-79 years) with median of 49.

All patients were treated as day cases under general anaesthetic and discharged with oral analgesia; one patient had a residual symptomatic haemorrhoid that required further THD with good outcome.

Conclusion: THD- mucopexy is a safe effective minimally invasive modality of treatment for prolapsing haemorrhoids in the short term. Further long term follow up and randomized control multicentre trials to compare its results with excisional surgery are warranted to establish its long term efficacy. 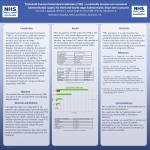