Background: Transabdominal preperitoneal (TAPP) inguinal hernia repair requires a 10mm and two 5mm trocars. When using a transverse peritoneal flap, a rather long incision is required. Tacks for MESH fixation and re-approximation of the flap may be associated with pain and are costly.

Patients and methods: A two port technique was used replacing one 5mm instrument with a Teleflex minigrasper whenever possible. The peritoneal flap was created from a 5-10cm vertical incision in the infraumbilical peritoneum and re-approximated with a running suture. Dissection of the inguinal region was done in a reduced size pocket. Progrip MESH was used to avoid tacks.

Results: Median age of the 21 men and four women was 65.3 (range 36.2-82) years; there were 19 unilateral and six bilateral inguinal hernias (including three recurrent hernias and five incarcerated hernias). Two patient had large inguinoscrotal hernias. The minigrasper was used in 20% in the first 10 and 67% in the last 15 cases. Tacks for the flap were used in 50% in the first 10 cases; in the last 15 cases the flap was sutured in 87%. Various techniques to suture the flap were tried out, the V-lock turned out to be the easiest option and was made standard. TAPP was done as outpatient procedure in 48% of cases, 36% of patient required 23 hours extended recovery; only four patients with severe co-morbid conditions required admission. Complication included seroma (n=4), hematoma (n=1), bladder injury (n=1) and urinary retention (n=2); two patients with preexisting groin pain had ongoing symptoms post TAPP. No recurrence was observed during a median follow up of 379 (range 15-625) days.

Conclusions: Creation of the peritoneal flap from a midline incision and re-approximation using a running suture is technically feasible. The created preperitoneal pocket is smaller than in conventional TAPP but still allows good exposure. Avoiding tacks is cost saving and may reduce pain. In standard cases the procedure can be done with two 5mm ports and the Teleflex minigrasper. 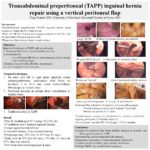