INTRUDUCTION
The combination of umbilical zigzag skin incision technique and Gelport laparoscopic system (Gelport) was introduced as an effective procedure which reconciled reduction of technical difficulties and cosmetics in laparoscopic surgery. It is possible to acquire 6 to 7 cm width hole through umbilical zigzag incision. More over it has been reported that this surgical scar was shrunk gradually. Gelport was introduced as an effective procedure which made reduction of technical difficulties by performing hand assisted laparoscopic surgery (HALS) simultaneously. We introduced this technique in laparoscopic distal pancreatectomy as a safe procedure for reduced port surgery without spoiling cosmetic effect.

METHODS AND PROCEDURES
The brief procedure was described below; after marking a zigzag skin incision in the umbilical region, the skin was incised along this line. Then, a Gelport was equipped through the incision, which enlarged the diameter of the fascial opening to 7 cm. We added another two or three trocars of 5 mm in diameter according to the difficulty of manipulation. We evaluated the number of port, surgical incision status, perioperative status and complication.

RESULTS
We performed laparoscopic standard distal pancreatectomy with splenectomy using this technique in 4 patients who all suffered from low malignant pancreatic tumor. The diameter of umbilical incision hole was 6.8 cm. The average length of umbilical closed incision was 4.3cm. The number of added trocar incision was 2.6 on the average. HALS was performed in part to all patients for palpation of pancreas or holding operative field of view. There were no perioperative and post operative complications. The average of postoperative hospitalization was 11 days.

CONCLUSION
The trans-umbilical approach using Gelport through zigzag incision technique was useful method for introduction of reduced port surgery in laparoscopic distal pancreatectomy with reconciliation of operability and safety. 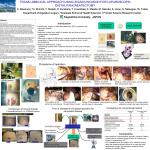