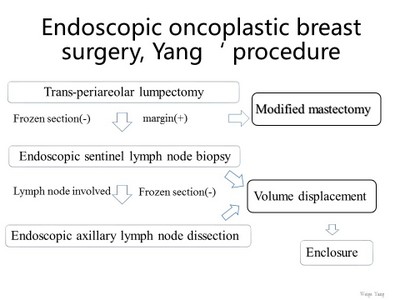 Although endoscopic surgery has been introduced to breast surgery since 1993, the benefits of minimal invasiveness and cosmetic results that expected, has been taken place by sentinel lymph node biopsy(SLB) and oncoplastic breast surgery. Endoscopic surgery may not change the local treatment for breast cancer unless new attempts are established. Here we report our procedure for endoscopic breast conservative surgery using a 3cm peri-areolar incision, that contains lumpectomy, SLB and axillary lymph node dissection(ALND) if needed. In addition, this procedure does not need liposuction.

Lumpectomy was operated after the skin flap was separated using a peri-areolar incision. The margins of the specimen was sent to frozen section immediately. Once the negative pathological findings was reported, the incision was partly closed by several towel forceps, and a 10mm and a 5mm trocar were inserted into the peri-areolar incision. An additional 5mm trocar was inserted in the midaxillary line horizontal to the nipple level. SLB was then operated by the identification of blue-stained lymph nodes. If positive, continue to endoscopic ALND using the same set. A cavity was established first. Then, the two main border lines, the outer edge of pectoralis major, and anterior border of latissimus dorsi was anatomized. Axillary tail of the breast was mobilized and pulled towards the nipple, so that more cavity was obtained. Along the outer edge of pectoralis major up, axillary vein was isolated and skeletonized. Along the outer edge of pectoralis major deeper, long thoracic nerve was isolated. Lateral thoracic vein and thoracodorsal vascular nerve-tract was then isolated. The lymphatic tissue among the anatomical landmarks was then dissected and was taken out from the peri-areolar incision. The axillary tail was then displaced to the depression where lumpectomy was operated and sutured to the edges. Finally, the incision was enclosed. 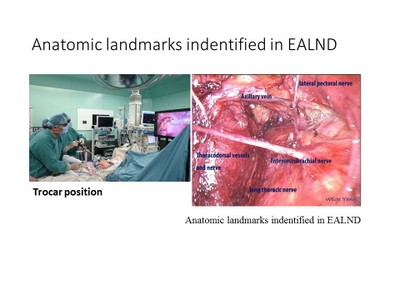 We did endoscopic lumpectomy with EALND in 18 patients, lymph nodes number harvested and drainage were collected and compared to 24 patients treated with conventional procedure. The endoscopic procedure took more lymph nodes (18.94±6.40 vs 13.63±5.72, P=0.007), and same drainage volume (136.94±64.69 vs 114.21±73.79, P=0.36). All the patients treated by endoscopic procedures are very satisfied with the cosmetic result as well as no axillary scar. 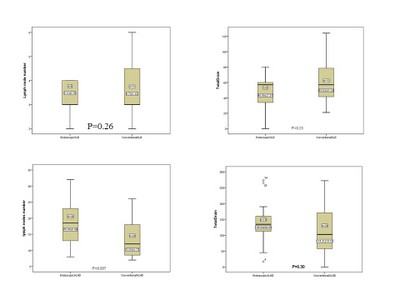 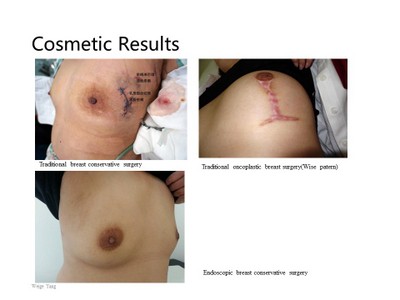 Endoscopic oncoplastic breast surgery did the same treatments of the conventional procedure in a peri-areolar incision. We lack long-term survival, complication rates and cosmetic results, which has to be continued for a further determination. We believe that patients suffering from breast cancer will get benefit from this procedure, with minimally invasiveness not only to her body, but also to her spiritual life.